Get fresh music recommendations delivered to your inbox every Friday.

Back Where I Belong 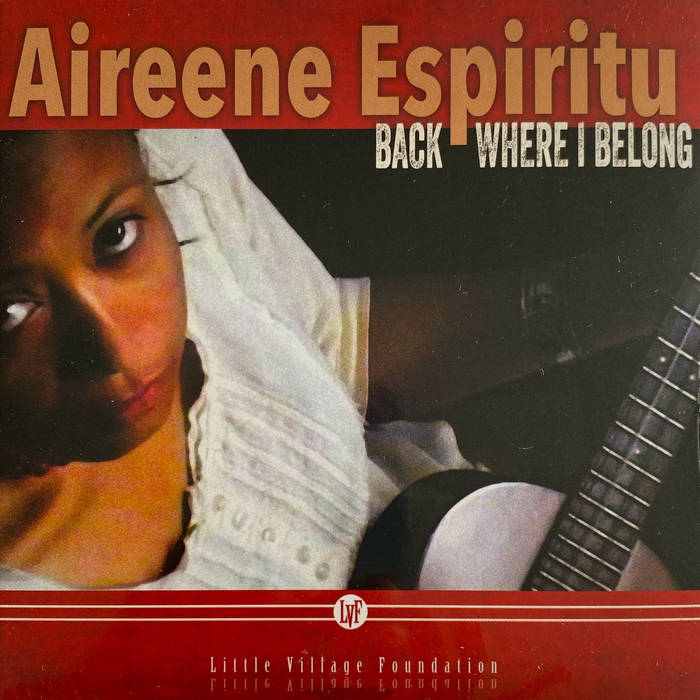 This album is a prequel. The missing link between the songs she never sang and everything she has done to date. On this album, Aireene Espiritu explores the roots that made her the unique voice she is in folk music and simultaneously reveals to us both a powerful persona and a touching glimpse into her background.

We had hints. The clues have been there all along in her phrasing -the personal touch that every singer applies to the basic melody and rhythm of a song. Old-school folkies tend to either minimize this coloration or stick to traditional affectations of Appalachia and the European roots that music came from. Aireene, on the other hand, tends to pull her seasoning from the gospel and R&B end of the spice rack. Where does she get her flavor profiles?

50 years ago another diminutive, Filipino-American singer was carving out a name for herself as an R&B singer and songwriter. Sugar Pie DeSanto’s biggest hit was her 1960 single, “I Want To Know”, which reached #4 on the Billboard Hot R&B Chart. She was signed as a singer and songwriter to Chess Records in Chicago in their heyday of the ‘60s and built a reputation as a dynamic performer whose live shows far surpassed her studio recordings. At 80, Sugar Pie is still with us, performing in 2016.

LVF’s Jim Pugh met Aireene at a folk music conference in 2014. She was playing solo with just a ukulele among hundreds of other performers, but Jim came away with a bug in his ear. Over the next year he developed an idea that seemed out of left field -Sugar Pie’s R&B music with folk singer Aireene singing.

No one familiar with Aireene could have seen this coming or predicted the outcome, but having heard the result, one wonders how there could have ever been any doubt. What you hold in your hand is the perfect sum of pieces no one considered might fit. A gorgeous answer to a question unasked. In spite of the fact that Aireene has never been here, this is where she comes from. This is the look back at the songs she never sang. Aireene Espiritu, back where she belongs…

Back Where I Belong


Copyright 2016. All rights reserved. Made in the U.S.A. Unauthorized duplication is a violation of applicable laws.

Boatloads of Thanks
Thanks so much to the Little Village Foundation for allowing me to explore a different but familiar sandbox. To Uncle Butch, Uncle Boyet and Auntie Mitus for your influence in music and making this album whole. To the incredible and kind musicians who played in this album and everyone at Greaseland Studios. You blew my mind, so damn good, thank you. I am a grateful and lucky gal. love mucho, aireene

Aireene Espiritu plays a mix of stompin', swayin' and timeless Americana reminiscent of front porch storytelling, of ghosts and the living, times of laughter and tears. A Color-Coded Symphony is her latest project, a musical experience connecting the audience’s ethnic origins to rhythms of the world. ... more

Bandcamp Daily  your guide to the world of Bandcamp